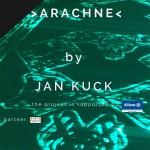 We are proud to invite you to the first stage of the Exhibtition ARACHNE by Jan Kuck during the Venice Architecture Biennale 2016 at Arsenale Docks in Venice, Italy. The illuminated carpet Installation ARACHNE deals with circumstances of global textile production and trade routes in an historic and contemporary context. With all of this Jan Kuck not only... weiterlesen >> 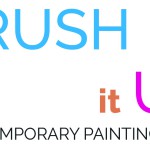 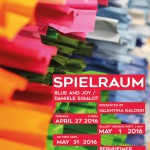 +++ EXTENDED UNTIL JUNE 19TH 2016! +++ The solo show SPIELRAUM by Blue & Joy artist Daniele Sigalot occupies four rooms of the agency. The Italian artist presents some of his new significant artwork. A monumental concentric structure of aluminum that gives the name to the exhibition welcomes the visitors in the main room. The SPIELRAUMsculpture is suspended from the... weiterlesen >> 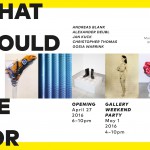 What would I die for?

+++ EXTENDED UNTIL JUNE 19TH 2016! +++ BERNHEIMER CONTEMPORARY is proud of their first group-exhibition during the Berlin Gallery Weekend. WHAT WOULD I DIE FOR? is a representation of the ultimate sacrifice someone would die for. The exhibit features works of five contemporary artists prepared to take place during Gallery Weekend. The monopol-Magazin put us on number one of their Gallery Weekend Opening advices:... weiterlesen >> 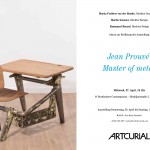 May 7, 2016 7:45 pm Published by Jan Kuck Comments Off on Jean Prouvé – Master of metal exhibition by ARTCURIAL

During the Gallery-Weekend 2016 we have a very special guest: the french Auction House ARTCURIAL shows originals from the star designer and architect Jean Prouvé. Jean Prouvé – Master of metal

Blue and Joy is the name of a project founded by Daniele Sigalot (Rome, 1976) and Fabio La Fauci (Milan, 1977) in 2005. Initially born as a comic book, it gradually developed into a full art project. Sigalot and La Fauci began their collaboration in the advertising industry, where they quickly made a career moving from Milan to Barcelona and... weiterlesen >> 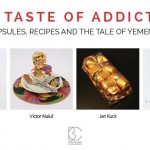 The Taste of Addiction