Warning: Use of undefined constant i - assumed 'i' (this will throw an Error in a future version of PHP) in /kunden/435842_80333/bernheimercontemporary/htdocs/wp-content/themes/html5blank-stable/single.php on line 12 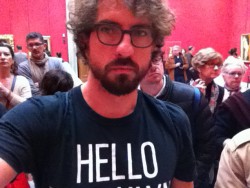 Blue and Joy is the name of a project founded by Daniele Sigalot (Rome, 1976) and Fabio La Fauci (Milan, 1977) in 2005.
Initially born as a comic book, it gradually developed into a full art project. Sigalot and La Fauci began their collaboration in the advertising industry, where they quickly made a career moving from Milan to Barcelona and eventually to London, where they were hired by Saatchi & Saatchi in 2006.
Once on top of the advertising chain, they quit their job to focus full time on their artistic project. In 2008 they moved to Berlin where they opened their studio ironically naming it “La Pizzeria” in order to stick to the cliché of italians being eccelent only in the food business.
Since then the Blue and Joy project has been making something of a name for its boundless media project.
Its ability of communicating corresponds to a wide linguistic versatility: testing through a variety of materials, often innovative, multiple and interdisciplinary techniques, always resulting in visually striking installations. Ironic and conceptual, the Blue and Joy project has a constant confrontation about communication: verbal, visual, coded, allusive, but always revealing hidden messages combined to real emotions.

Since its early days this project has spread gradually and ceaslessly, reaching peaks of excellence with exhibitions at the Museum La Triennale in Milan, in the Royal Palace of Naples, in the Freedom Tower Museum in Miami, at the MAR in Ravenna or in the Church of Saint Matthew in Lucca.

At the end of 2014 Fabio La Fauci began to step out of the project in the pursuit of an independent career. In the same year Blue and Joy‘s iconic aluminum paper planes were chosen by the italian fashion powerhouse FENDI to launch their new collection worldwide, spreading their reach in 28 cities in the 4 corners of the globe.

In 2015 Blue and Joy exhibited in Miami, New York City and Rome.

2016 begins with the collaboration with Bernheimer Contemporary.