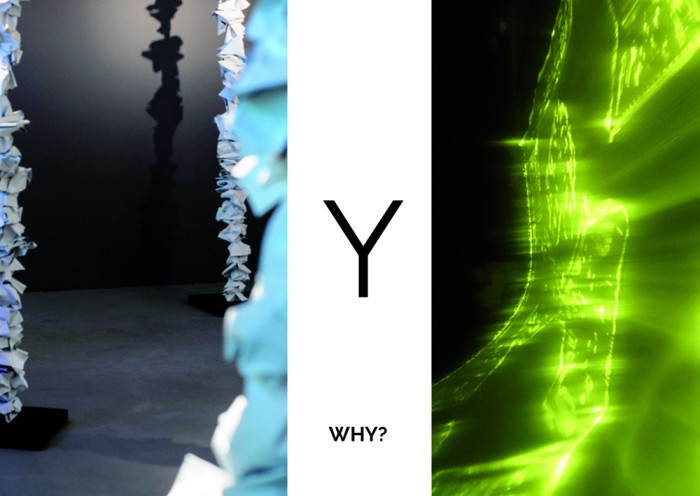 WHY– WARUM?
The World’s Broadest Question

(or Why We Find Ourselves at a Parting of the Ways)

The question “why?” asks about cause, asks about the causative conditions of realities in the past. In response to a why question, one can immediately pose the next why question – as children do – until the chain of causality leading to the observed event is comprehensible, or one simply chooses to stop asking.

A gap always remains, however, in the answer to a why question, since the goal and purpose of a causal relationship – whether past or present – remain open and hidden. Why? is therefore a question about causes. Thus the word “why” is supplemented with the question “to what purpose?” – with a question about the future, with a question about “where to?” In art, this vision of the future may flash in an anticipatory way alongside the question of cause. In addition to “why?” art inquires “what for?” and, with it, “where is it heading”?

At the 35th International Geological Congress held this summer in Cape Town, it was agreed that the middle of the last century marked the dawn of an entirely new geological epoch, the Anthropocene. This was the moment when nuclear bomb tests dispersed radioactive elements across the planet and human influence over the earth became staggeringly rapid, leaving permanent traces in geological sediment. Nothing like this has ever happened before in the history of the earth. Since the outbreak of the Anthropocene roughly two human generations ago, the topic of the Future has simultaneously increased from being a private concern – as it was for centuries – to a global one.

Let us therefore start asking questions about purposefulness, about prospects for the future! To this end we provide some potential new stimuli for art and its ideas. In order to focus on the topic of the Future, it is time to connect questions of “Why?” to questions of “What for?”

In English, the word “Why?” is homonymic with the letter Y, a beautiful character that can also be read as a sort of parting of ways, a fork in the road.

The works on view at Ballhaus Gartenstrasse to coincide with Berlin Art Week 2016 gives sensory expression to the expanded reading suggested above. Here in the exhibition “Why,” the means of art connect questions about cause with questions about the future.