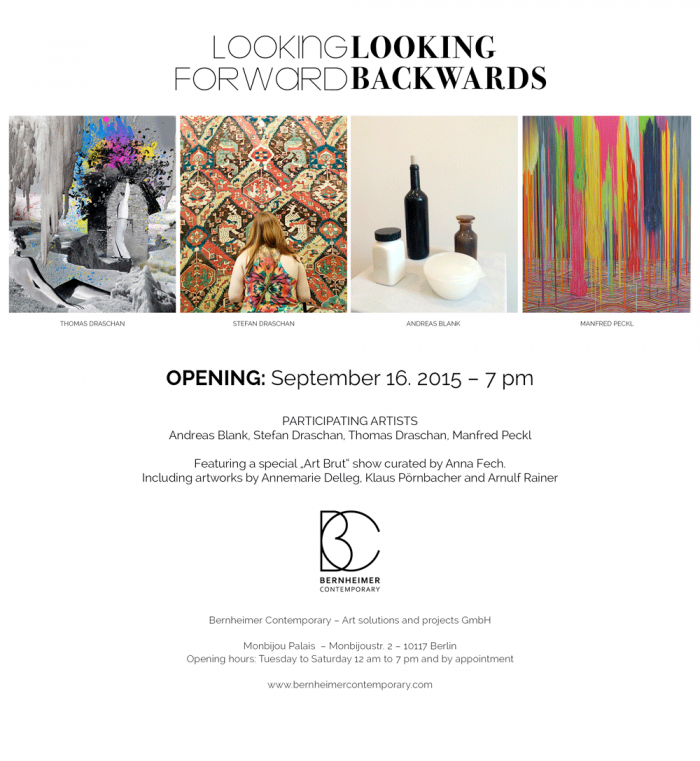 After the big success of her first exhibition “Who Cares? Social Responsibility in Contemporary Art“, Isabel Bernheimer opens the second exhibition of her agency Bernheimer Contemporary Art Solutions and Projects on September 16th 2015 at the Monbijou Residence under the title “Looking Forward Looking Backwards”.

Past and present are being connected in the exhibited works of art. The artists create something completely new out of old, used material. Materiality is brought to the fore, as its original context merely lives in the perception of the beholder, but not on the distorted surface itself.

Andreas Blank works with fine stones like marble and alabaster, that were reserved to statues of gods or emperors in ancient times, to create contemporary and partly ordinary objects of everyday use. His art distinguishes itself by the precision and skill with which it is executed, so that the materiality of the objects is not discernible at first sight. By disguising his sculptures as everyday objects out of plastic or paper, packaging material that has become self-evident, he achieves compositions.By this rupture, the irritation of the first glimpse, Andreas Blank lends an almost absurd character to his still lives and sculptures.

Stefan Draschan, photographer and bicycle-activist, shows his sharp eye in three photographic series. For his series People Matching Artworks he lays on the lookout in Berlin’s museums for hours, sometimes days, just to capture the visitors in front of venerable artworks within seconds as soon as he detects a visual correlation between the two. Be it the pattern of the visitor’s clothes that follows up the design of a tapestry or a certain colour scheme. He has perfected his course of action to the extent that he knows most of Berlin’s galleries and museums by heart. As a matter of fact, he knows that the colour red is strikingly underrepresented at the Alte Nationalgalerie. Draschan is on first name basis with museum attendants who occasionally point out interestingly dressed visitors to him. On his patient hunt for new motives he decelerates the hectic life of the outside world for once, the right evasive moment, however, calls for a lightning reaction. This contrary process is united in his photographs.

Artist and filmmaker Thomas Draschan works with found material, he decontextualizes elements from old photographs, magazines or postcards and converts them into escapist collages. Thomas Draschan therefore – just like Andreas Blank – plays with the viewers coded perception and expresses criticism. Aesthetically speaking, the futuristic retro-touch of his collages offer tense time relations. For his tapestries he utilises and enlivens old textiles, high quality fabric from the past bought second-hand and discount cloth of inferior quality are interwoven.

Total artist Manfred Peckl also draws from recycled material, his collages at first sight appear to be painted, but once again the viewer is deceived. The source of his works are simply print products like posters that he strips into pieces according to colour, form and writing, then assorts and assembles anew. He destroys in order to create. He calls this approach “painting with different means”, adapted to contemporary culture, in which the painter is not a painter anymore. Through further reworking of the pieces with shredded black paper, they appear to be deluged with pitch or tar. The artist thereby transforms the former shiny happy people from the posters into morbid creatures. It is an ironic-critical intervention, as by “taring” he refers to the labelling of outsiders of our society who then as now served as “entertainment” for the general public. Like Thomas Draschan’s art, Manfred Peckl’s work is usually of exuberant character, fed with hints at art history and biographical references.

In addition, Isabel Bernheimer has asked Anna Fech to curate one room on the topic of Art Brut/Outsider Art. Works by Annemarie Delleg, Klaus Pörnbacher and Arnulf Rainer are shown in dialogue. In the context of the exhibition the art of Delleg and Pörnbacher, who were both born with Down syndrome, constitute a break as they neither look back nor ahead. Their pieces speak of the intensity of the moment and the utter surrender to the current sentiment. It may well be that what us “normal” people call a disability is actually a liberation from the contemplation of the future and the pondering on the past, which allows a complete coalescence with the moment and the world of emotions. Delleg’s drawings therefore become an attempt to catch this intensity of life in emphatic strokes. Again and again she circumscribes the contours to intensify the black and refine the outlines. Pörnbacher on the other hand applies layers on layers of his favoured tool oil chalk in an impulsive

manner and in forceful hatching which results in a thick netting of colour bushes and fields. They resemble Arnulf Rainer’s restless overpaintings, one can only guess what lies underneath. On his search for new physical expressive possibilities and a more direct access to the subconscious, Arnulf Rainer has engaged himself intensely with the art of the psychologically and mentally disabled since the 1960s. Their art and behaviour became one of the most important source of inspiration for his own works. Today he counts to the the most important patrons and collectors of Art Brut, his collection contains inter alia works of Annemarie Delleg. We thank Gallery Jo van de Loo for their friendly support.

The labelling of Art Brut, raw art or outsider art so to speak, remains controversial. Coined by Jean Dubuffet in the 1940s, it does not describe a style, but rather the mode of production offside from the influences of the art establishment and beyond general conventions. Even though the term has taken root in today’s art scene and paved its way into Biennales and art fairs as an art form under Visionary Art, Artist’s Art and Naïve Art, it nonetheless reduces the way of perceiving the artwork. Thus, at Bernheimer Contemporary no polarisation of the “norm” and the “outside the norm” shall be carried out. The pieces are exhibited in dialogue with each other, while the quality of the art is paramount and not the background of the artists.

As a matter of course Bernheimer Contemporary’s consigned artists will also contribute to this exhibition, painter Milana Schoeller, conceptual artist Jan Kuck and the designer Dirk Biotto amongst others.